Please be advised that on October 19, 2017 the Marion County Circuit Court approved a petition to implement a flat user fee for properties that are connected to the wastewater collection system in the Ben Davis Conservancy District (BDCD). The user fee is in addition to other taxes and fees that are currently being charged for wastewater service. The fee is being assessed as a result of a court ordered increase in the treatment fees being paid by the BDCD to CWA Authority, Inc. (CWA). If approved by the Conservancy, the rate will be set at a maximum of $8.00 per month for each residential connection. A public hearing has been scheduled for November 27, 2017 at 6:00 p.m. at the Fleming Garden Christian Church, 530 S. Taft Avenue, Indianapolis, Indiana 46241.

The Ben Davis Conservancy District is a local unit of government that is owned by the freeholders (property owners of record) within the district boundaries. The District is managed by a Board of Directors who are elected annually by the freeholders. The Board is responsible for overseeing the operation and maintenance of the sanitary sewer system in the Conservancy which includes a large part of Wayne Township. Operations are funded through Ad Valorem property taxes that are levied against all real estate in the district.

Wastewater flows from the District’s sewers are currently transported for treatment to the Belmont Wastewater Treatment Plant (WWTP), which is owned and operated by the CWA Authority (CWA) for Citizens Energy Group (CEG). In 2015, the Indiana Utility Regulatory Commission (IURC) ordered CWA to renegotiate the contracts that were in place for treatment services with its satellite customers which included the BDCD. This was necessary due to a subsidy that was believed to be unfairly provided to these customers through lower rates.  The IURC agreed with CWA that the satellite customers were paying less than the cost of processing the sewage.

As a result of litigation initiated by the BDCD, a court ordered settlement was reached with CWA to allow charges for processing sewage to be increased gradually over the next 8 years. Eventually, the BDCD rates would be increased to the same level as all other users in Marion County and the other satellite communities that are served by CWA.

As such the BDCD will need to collect a considerable amount more each year in order to pay the increased rates. This greatly concerned the Conservancy Directors since the operational costs are primarily financed by property assessments in the form of an Ad Valorem tax. The Directors feel that it may not be fair to many residents to pay higher property taxes for using a service that is equally used by all property owners regardless of the value of the real estate. It was decided therefore that implementation of a user rate would be a more equitable method of collecting additional funds.

Prior to implementing a user rate, a public hearing will be held in order to consider input from the BDCD property owners. As noted above, the hearing is scheduled for Monday, November 27, 2017 at 6:00 p.m. at the Fleming Garden Christian Church. If the user rate is approved after hearing all public comments, the Board has preliminarily suggested that the rate be established at a maximum of $8.00 per residential connection. Non-residential users will pay a higher fee which will be established through a conversion to an equivalent residential usage. In the future, the District hopes that the user fees collected will be sufficient to allow the Ad Valorem tax to be reduced. At the present time, these tax revenues are the sole source of funding the administration, maintenance, and operational costs of the District.

The BDCD Board is also studying the feasibility of building and operating our own sewage treatment plant. Preliminary evaluations indicate that this may be a less costly option than continuing to send our wastewater to CWA for treatment. This will also assure that we will not be hostage to the rising treatment costs imposed by CWA with little or no recourse on our end.

The Board would prefer not to increase the Ad Valorem taxes within the Conservancy District if at all possible. As an alternative, we believe that instituting a user fee would be more practical as it would distribute costs more equitably between residential, commercial, and industrial users. Please understand that we, as fellow freeholders of the Conservancy, are also affected by this situation. We are committed to keeping operating costs low and we would like to assure all freeholders that we will do our best to be good stewards of the District’s finances. Additional updates will be provided in the months to come. 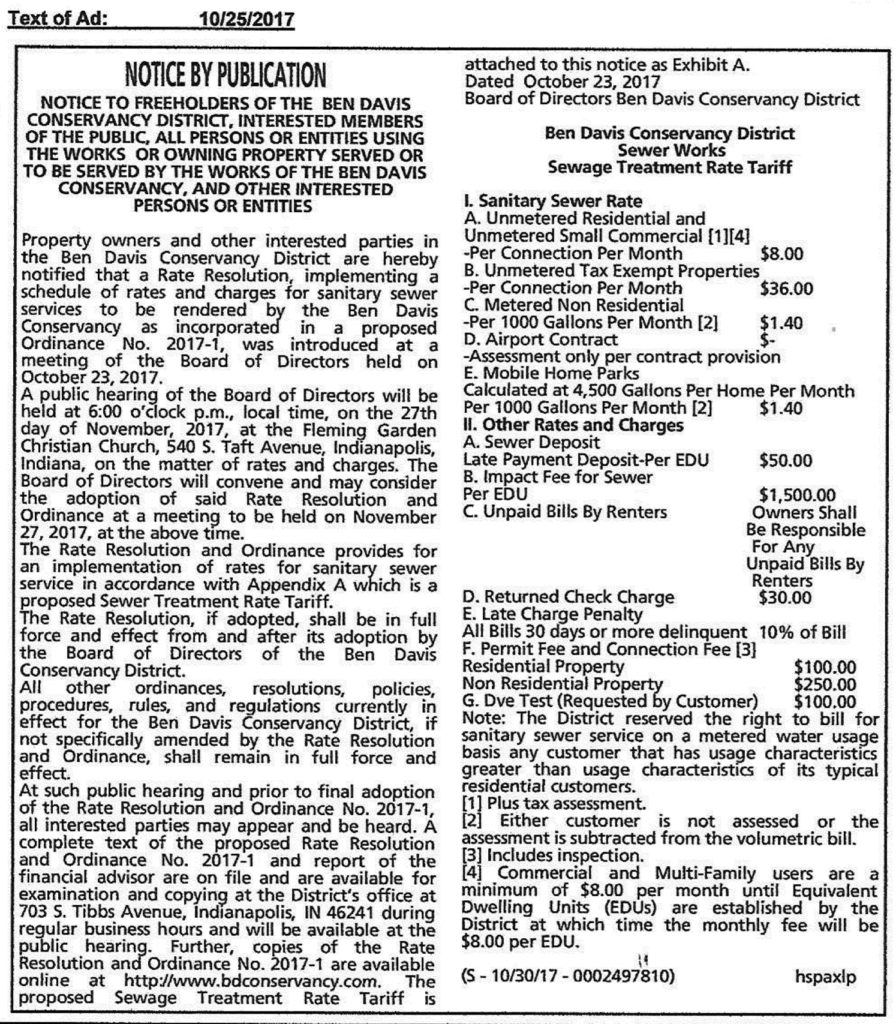 The Conservancy directors are concerned that because the operation of the Conservancy is financed almost entirely by the property tax it may not be fair to many residents to pay ever increasing property taxes for using a service that is equally used by all owners of real estate and has no real relationship to the value of one’s real estate. While a decision has not yet been made by the Conservancy Directors, they feel, according to Buckingham, that they should have a user fee as a contingency plan to implement in the future should the property owners in the Conservancy feel that it would be beneficial.

By now, you have probably heard that CWA Authority, Inc. (CWA), the entity that operates the sewage treatment plant which serves the greater Indianapolis area including the Ben Davis Conservancy, has received a substantial (almost monstrous) rate increase from the Indiana Utility Regulatory Commission (IURC). This was brought about in part by a consent decree of a federal court involving the Environmental Protection Agency that mandated the City of Indianapolis to clean up the quality of water ﬂowing down the White River. The rate increase involved affects the Ben Davis Conservancy, the City of Lawrence, the City of Greenwood, and other contractors of sewage processing services. The IURC in its order of April 23, 2014, ordered CWA to renegotiate all of its contracts with its satellite communities because the IURC was “disturbed” that Ben Davis and other customers were not paying sufficient amounts to cover the cost of sewage treatment by CWA.

As a result, the Ben Davis Conservancy hired Mr. Parvin Price, a legal expert in utility law, with Barnes & Thornburg. Through his efforts, massive changes in sewer treatment costs have been delayed and residents of the Conservancy (as well as Lawrence and Greenwood) will slowly see their sewage processing costs rise over eight (8) years when all residents in the Indianapolis area will be paying essentially the same for sewage processing.

We regret that increases in the property tax for the Conservancy must rise. We believe that a user fee fairly apportioned between residential, commercial, and industrial users may be of great relief and we want you to know that we, as fellow freeholders of the Conservancy, are also a adversely affected and that we will do our best to ease the burden of property tax.

The ﬁrst is an order of the IURC dated April 23, 2014, mandating CWA to renegotiate all satellite contracts. In this order, it appears clear that the IURC was not going to permit the “subsidy” that the Ben Davis Conservancy District has enjoyed for many years to continue. The other is a news release from the IURC. We hope that this in some manner will explain why your property taxes were increased. You can be assured that we will do our best to keep our operating costs as low as possible and to deliver sewer services at the lowest price possible. We will keep all concerned freeholders advised in the months to come.